Each time I’ve visited the courtyard at the Isabella Stewart Gardner Museum, I’ve been surprised by how beautiful it is. It’s always like I’m seeing it for the first time. That was especially true yesterday when it serenaded me with subtle sounds of crickets, cicadas, and frogs. The sound artist who made it happen learned to make the sounds himself especially for this environment.

The courtyard is one of seven spaces within the museum hosting “Listen Hear,” a collection of sound art exhibits. The moods of sound contributed so much to my experience of the museum that I really wish they’d keep it there all the time. It made wandering through the halls and dark rooms magically transporting. Even the art looked different, more interesting, to me. It slowed me down. It no doubt helped that it was a weekday and, although it was far from empty, it didn’t feel crowded. Being alone helped, too.

Upstairs in the museum’s new modern addition, a wall of close-up cat portraits were part of another sound exhibit called “Sound for Insomniacs.” A viewer could sit on a wooden cube across from the portraits, put on a special pair of headphones, and listen to the purr of each individual cat. A little screen in the cube shows the name and image of the cat being heard. I don’t know why this surprised me—I’ve lived with cats for most of my life—but the purrs were remarkably different from one another. One was so gentle, it made me think of a finger softly stroking velvet, while others varied from bold to enthusiastic to musical.

An eerily satisfying collection of sounds could be heard in the main house’s Fenway Gallery, a small room the size of a large closet. The room was dark except for a mysterious shimmering mass dangling from the ceiling, so bright it could be seen from all the way down the hallway.

This suspended ethereal mass was made of small glass ampules containing blue and gold liquids, woven into a digital fabric containing miniature acoustic resonators and LED lights. With nobody in the room, the installation was silent. If people entered the room, or even walked past, it would pick up on the movement. This would send an almost ghostly series of sounds in motion—what sounded to me like a gently steaming soup of skittering, whispering, breathing, brushing, and blowing.

Peoples’ voices had the same effect on it. It interpreted all sound and motion, and then fed it back into the air with its own peculiar translations. It is aptly titled Sentient Veil.

Back in the cloister, the soothing chorus of insects and frogs went on beneath glorious strands of hanging Nasturium flowers. The blooms last about three weeks, and are a feature of every spring season at the Gardner Museum. This annual annual tradition was started by Isabella Stewart Gardner in the week prior to Easter. 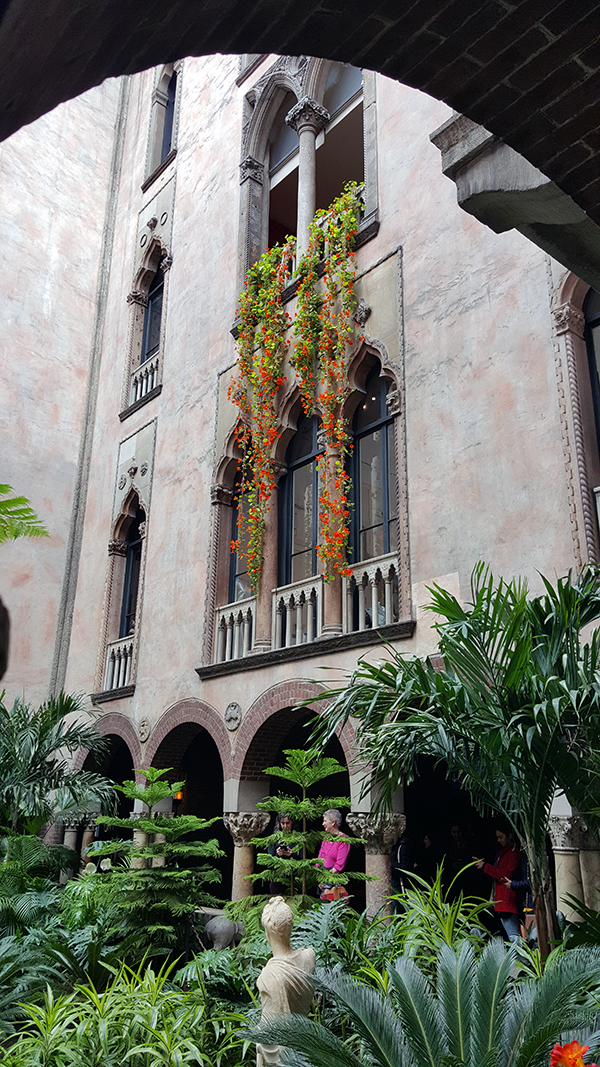 There are more sound exhibits inside the museum than what I’ve shown you here. This one goes until September 5. If you’re in the mood for an earthy and sensual change of scenery, this is as good a spot as any in Boston.