Most of my Quebec City photos were not lost as I had thought! These images are from The National Museum of Beaux Arts. We visited in late August on our last morning in Quebec City, as we had several free hours before getting on the road to Montreal.

We entered through the museum’s main, original building. There’s a sleek, modern underground tunnel that connects the original building to a newly opened wing across the street. In this tunnel is a 30-panel triptych, Tribute to Rosa Luxemburg, by Jean-Paul Riopelle.

Riopelle (1923-2002) was an abstract expressionist painter and sculptor from Quebec. This narrative artwork is a visual diary begun by the artist in 1992 upon learning that his former companion, the American artist Joan Mitchell, whom he’d shared 25 years of his life with, had died. 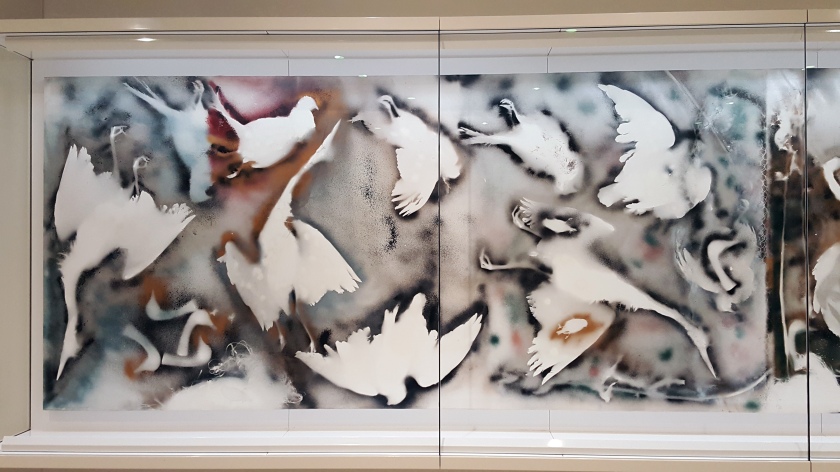 Here’s an excerpt from the museum’s description of it:

Anecdote has it that the title of the work derives from their years together. Riopelle, referencing Rosa Bonheur, a virtuoso 19th century animal artist, nicknamed Mitchell his “Rosa Malheur.” Rosa Luxemburg is first and foremost the name of a German Communist Party activist whose famous coded prison letters Riopelle knew.

To me, this mural-like work felt intensely emotional, and I found it alternately fascinating, morbid, and beautiful to study. 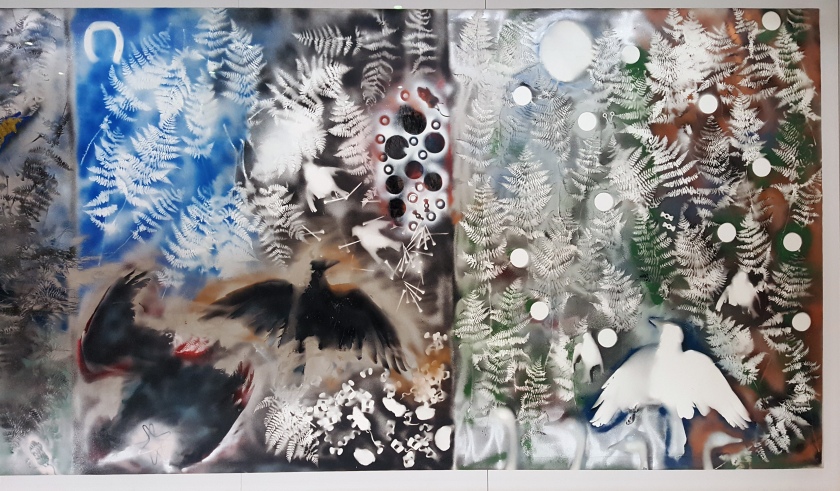 The misty, atmospheric effect was a result of paint sprayed over everyday objects and animal bodies. I’d like to think the artist didn’t kill the animals for this purpose, but I have no idea where they came from.

Created with both acrylic and spray paint on canvas, it was given to the museum as a gift from the artist.

Here are a few other images from the museum…

Near the end of the underground tunnel, this stairwell leads up into the new building. 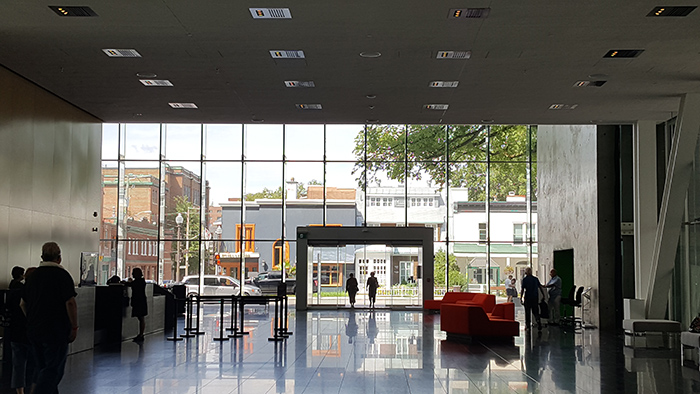 At the top of the stairs is the lobby of the newer building. It was a weekday morning, which probably accounts for the small number of visitors. 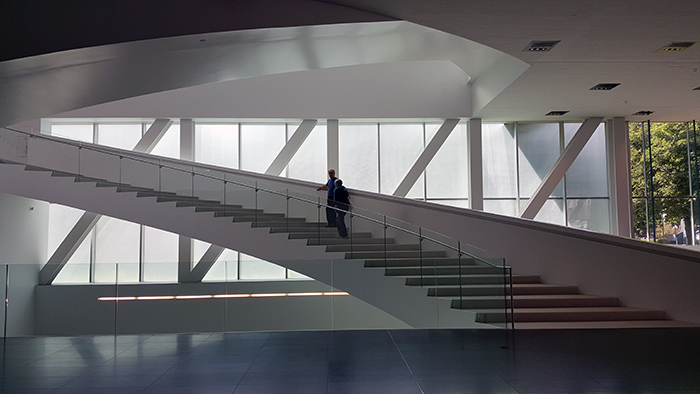 From there, there are more levels to explore. 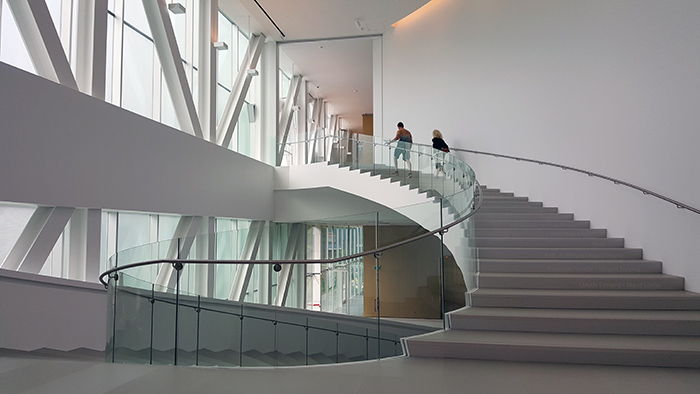 Upon reaching the rooftop sculpture garden, this is the view of the main Beaux Arts museum building and grounds across the street.

I fell in love with these green lampposts with their yellow hanging flowers found in several places around the front lawn of the original building. The long flowers, simultaneously weepy and cheerful, remind me of the stylized floral depictions seen in old Art Nouveau posters. 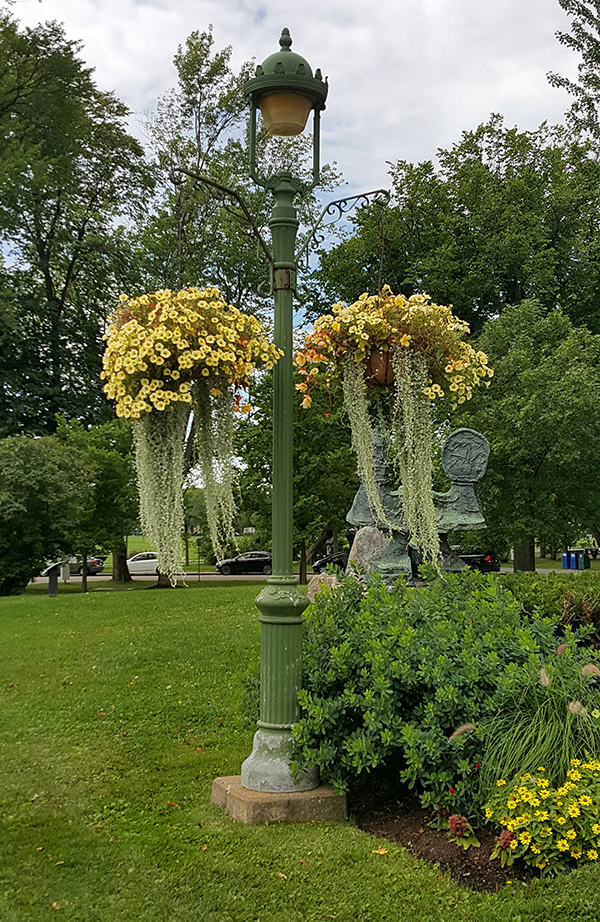 I think I may have to paint the hanging flower photo above. 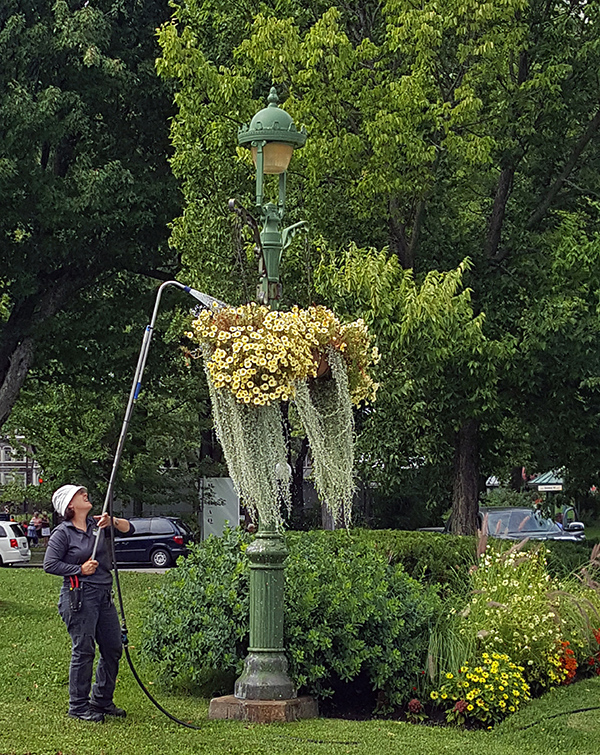 So, that’s how they water them.

I hope you enjoyed the images from Quebec City’s National Museum of Beaux Arts.