This month marks 23 years since I came to live in Boston. My first two winters in Boston had record snow falls — if memory serves me, around 100 inches fell in each of them. Also, the sun didn’t automatically shine every day, like it did in my prior life in Miami. That was something I wasn’t exactly prepared for.

As of four years ago, I’d lived here longer than anywhere else. I think there was a mind shift that happened when I realized that. Fast forward to 2016, and it appears I’ve gotten used to a lot of things about life in the Northeast. And I call it home, which is perhaps the most notable thing of all.

I really like the buildings here, and especially the juxtaposition of different styles of buildings. You can see so many eras (actually, centuries) etched into the architectural landscape.

As an artist, it’s fun for me to find new ways of showing the city through my eyes. I have taken a lot of photographs on long walks around town, and around 2009 I began to experiment with painting them. The painting process, done in Photoshop, was also experimental for me. 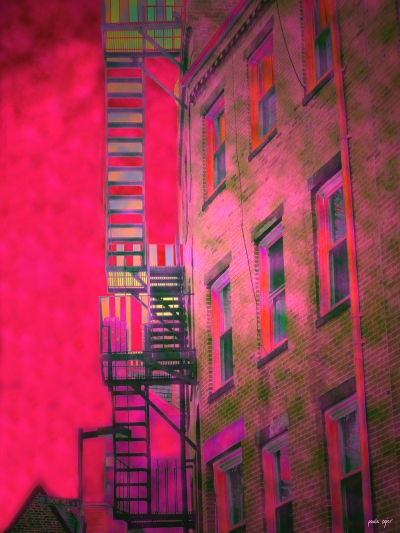 I found I really liked many of the images I made by translucently painting the photos, and that led me to explore other photo-based methods of painting the town!

Here’s an example of an opaquely painted photograph:

The original photograph layer has been removed; in the end it merely served as a template for where things go. There were so many painted layers it was no longer visible, anyway.

The rainbow moon reflecting on the side of the building is meant to evoke a sense of the neighborhood’s diversity. The warm glowing interiors express my feeling that the neighborhood is a friendly, homey, welcoming place.

Making art that expresses my sense of my town is both exciting and challenging. Here’s more of my city art.